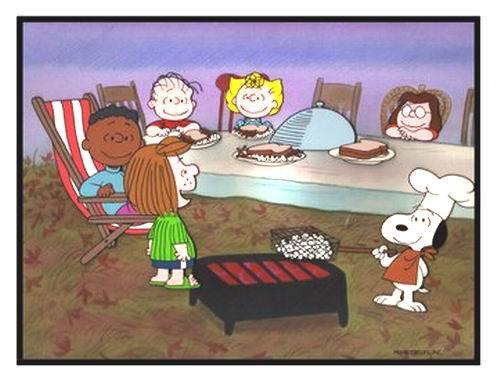 So this year, we were determined not to travel for Thanksgiving. And, selfish as it might sound, we also decided that we had no interest in inviting anyone. Is that awful? No, don’t answer that. It’s not awful. It’s smart.

Haven’t we all learned from holidays past that sometimes it’s really kind of nice to enjoy our own little families? To be thankful in peace (and relative quiet)? Not to torture our sensory challenged kids with a crowded house? So, alone was the plan.

But here’s what you have to understand about my dad. Dad’s gonna celebrate holidays with his little girl (yup, that’s me), his son (that’s Luau – Dad dropped the ‘in-law’ part years ago) and his babies (the girls) one way or the other. And it works. I have yet to say no. I have yet to feel the need to say no.  Ever. Because he couldn’t care less when the celebration takes place. Christmas in October? Done it. My August birthday in June? Yup. New Years on Jan 3rd? Why the hell not?

So, when my dad called to say that he’d like to come up the weekend before Thanksgiving, we all knew that Squanto and his Pilgrim friends would be feasting a little early this year.

My dad let me know in no uncertain terms that he was bringing the meal. I mentioned that I had seen a great recipe for a cranberry casserole, but I backed down after hearing the sigh on the other end of the phone. Dad knows that money is tight. He knows that Christmas is coming and our lives are incredibly busy. And he is Dad. You don’t say no to Dad. So we agreed to sit back, open the wine and allow him to take care of us. Yeah Dad!

I invited my cousins to join us for dinner. There was concern that we might not have enough food. I laughed. My dad has never served a meal without enough for three times the number of guests. Food, you see, is love. True to form, he brought dinner for ten adults.  Yes, ten adults, despite the fact that we planned to have only five adults and two children (who would be lucky to fill a plate between them). Yes, I knew we’d have plenty.

Our table groaned under the weight of the food. The flavors and colors and smells were dizzying. Turkey (fifteen pounds of it!), stuffing, gravy, cranberry relish, the best sweet potatoes I’ve ever had in my life (seriously), kasha and varnishkes, pickles of every shape, size, color and creed, potato knishes, potato pancakes. Hell, he even brought pigs in a blanket. OK, I can’t explain the pigs in a blanket, but they were a hit. Dad knows his audience.

I took my seat in between my girls at the table. Brooke was eyeing her turkey suspiciously. She took a small bite, but it didn’t look promising. She asked for a slice of buttered toast. Toast? Really? I thought about offering something else, but instead, as I often do when the house is full and Brooke is on edge, I took the path of least resistance. As I was toasting her bread, I ran through a comparative study in my head. – ‘foods on the table vs. foods I have a prayer of getting her to eat.’

I honed in on mashed potatoes. Ah, the otherworldly mashed potato – the marriage of my culinary loves – starch, butter and salt – my entire motivation for sitting down to Thanksgiving dinner. She’ll eat mashed .. Wait a minute! Where are the mashed potatoes? As I buttered her bread, I peeked out at the table. Potato pancakes, potato knishes, even kasha and friggin varnishkes .. but not a smashed potato in sight.

Now, you must understand, I know that I must sound desperately ungrateful as I hone in on the one – the only – thing that was not on the table. It would appear, I’m sure, that I am a desperately spoiled brat who doesn’t appreciate her dear old dad’s generosity. I assure you, this is NOT the case. Quite the contrary. And all of this would have stayed safely inside my little foam stuffed head were it not for what came next.

I sat back down next to Brooke and started to pile carb after delicious, delightful carb on my plate. And then I heard it. A small voice to my right, muttering quietly.

She continued to mumble to herself for a while and it seemed to be keeping her calm. She often runs through entire scripts or books in her head, especially when there’s too much going on around her. Blissfully, she sat for a good chunk of time without asking for a break. But then something changed.

Her voice became much louder and quite clear as she said, “WHAT KIND OF THANKSGIVING FEAST IS THIS?”

I looked around the table. Thankfully, this was not a subdued crowd. They were chattering away and laughing loudly enough that her opening salvo seemed to have flown under the radar.

“WHERE ARE THE MASHED POTATOES?” she all but screamed.

Oh My God. In can’t even believe she noticed! OK, so we all love mashed potatoes and yeah, it’s really kind of a travesty to have Thanksgiving without them, but um, Are you kidding me?

How on earth? What on earth? Thank God Dad’s at the other end of the table!

Later in the evening, once the older generation had retired to bed, we got the kids into their jammies and settled in for a viewing of A Charlie Brown Thanksgiving.

We laughed at the Peanuts’ antics. We watched as Snoopy served up a meal of buttered toast, popcorn and jelly beans. Wait, buttered toast? Hmm. And then we watched with particular interest as Peppermint patty accosted Chuck with a barrage of ingratitude. It went something like this:

27 thoughts on “an early thanksgiving”