With Brooke’s sixth birthday quickly approaching, family and friends have generously been asking what she might like for her birthday. I came up with a few ideas, but, as I always have, I really wanted to see if Brooke might tell me for herself what she’d like. I wasn’t particularly hopeful.

I didn’t mean to sell her short, but as recently as this past Christmas, conversations about what kinds of gifts she might like have gone something like this:

“Brooke, what do you think you would like for Christmas?”

“OK, what would you like the present to be?”

“OK, so when you open the box, what would you like to find inside?”

And so, as I’ve done for nearly six years, I did my best to guess at what I thought she would enjoy. But, stubborn as I am, I still asked the questions. Imagine my delight when she answered them like this:

I tried a slightly different tact.

Now, those of you who have been following along for  a while know that Boots (with a capital B) is not footwear, but this guy ~ Dora the Explorer’s sidekick and Brooke’s all time favorite monkey. If you happen to have kids young enough to be enamored with Dora, perhaps you’re familiar with the movie, Dora’s Halloween Adventure. For the uninitiated, let me give you a quick synopsis of the relevant plot line.

Boots has trouble deciding what he’d like to be for Halloween. Throughout the movie, he vacillates between dressing up as a fireman and going as a chicken. (OK, so it ain’t Sophie’s Choice, but Brooke loves this stuff.) After a movie’s worth of angst, our hero finally decides to go as a firechicken. Yes, a firechicken. Boots decides NOT to decide and creates a hybrid costume.

And so it is that my sweet, innocent, unassuming daughter wants a Boots doll dressed as a firechicken. Which, of course, does not exist anywhere on the planet. Not even in Canada. (Anyone remember this?)

But Mama ain’t gonna give up wihout a fight. So far, my thought is something along these lines: 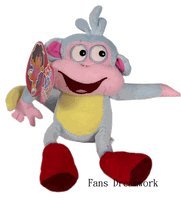 wearing this costume (made for a bear ~ close enough)

But that’s where I lose steam. A chicken suit? For a doll? Anyone? Beuller?

ed note .. after further research (meaning Brooke looking at the picture above and telling me I have it all wrong) I’m now back to square one. Or square zero. Apparently, Firechicken Boots wears a RED fireman hat (OK, that I can probably handle, though so far all I’ve seen is black) and a WHITE chicken suit. With feathers. And wings. Which brings me back to .. HELP!!!!!!!!!

ed other note … did I mention he needs to be carrying a pumpkin?