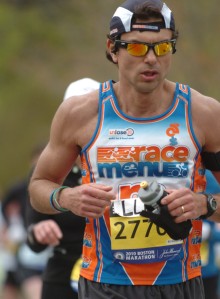 As many of you know, my husband runs.

He runs because running is where he finds freedom.

But this November, he will be running for our children.

He will be putting one foot in front of the other for just over twenty-six miles as he joins thousands of other runners in the New York City Marathon.

You see, when the going gets tough, some men run.

Thankfully, my husband is one of them.

Below is the story in his own words, from his blog Run Luau Run.

Please support him if you can.

On November 7th, 2010 I will be running the ING New York City Marathon. It will be my 4th, possibly 5th, marathon, but it will be the first that I run representing a charity. I have chosen a charity that is very close to my heart – Autism Speaks. My daughter, Brooke has autism. She was diagnosed over 3 years ago and when my wife and I were told the news, there was very little support out there. In the time since then, the tools and resources available to families with new diagnoses have come a very long way. Part of that is due in large part to the efforts of Autism Speaks.

They have been a tireless advocate of awareness, something both the wife and I strongly believe in.

Ignorance is the parent of fear and cruelty.

Awareness is the parent of understanding and compassion.

With awareness comes understanding which can eventually lead to compassion. I have been amazed how people have responded to my little Brooke once they know what she has to deal with on a daily basis. Once they understand that a room full of talking children can literally be a painful assault on her ears, or that trying to follow what a teacher is saying in class can be as if you were trying to understand a lecture on economics by a professor who spoke 4 out of 5 words in a language you didn’t understand, or that a simple, repetitive sound that you or I simply block out as white noise becomes an itch that she cannot possibly hope to scratch; once people understand this, their awareness quickly turns to compassion. People start looking out for Brooke because they know that in the end, she is just like any one of us, just a little different in how she perceives the world.

I believe that the more people I can make aware of autism and its effects on both those who have it and their families, the better the world will be when my little girl grows up. The wife and I have, from a very early point, been fairly public about autism, Brooke and our family. Not everyone chooses to “come out” if you will, and I have grown to accept and even understand that. By the same token, I feel that as long as autism is kept in a dark corner, hidden away as something to be ashamed of, then ignorance, fear and cruelty will continue to exist and grow.

And so I run. This November I will run to help push the boundaries of awareness. I will talk to anyone who asks about the lows and highs (yes, highs) of having a child on the autism spectrum. I will encourage people to speak loud and speak proud of their children or themselves. I will remind parents that no victory is too small to cheer and that no defeat is too large to throw in the towel.

Autism Speaks is a charity I respect and have a passion for. They do so much and work so hard to make the world a better place for my Brooke, for both today and tomorrow. But it’s not just my Brooklet that they are helping. Everyday a new family is devastated with the news that someone in their family, whether they are 3, 13 or 23 years old, has been diagnosed with autism. I have had many friends come to me over the past year asking questions and expressing concerns about their own children. With resources like the First 100 Days Kit, these families are now able to find the tools to help ease that initial pain and start moving in a positive direction.

So I am asking you to help me help my little Brooke and all the families out there affected by autism. You can do that by clicking

The link will take you directly to my fundraising page for this year’s New York City Marathon. I have committed to raising at least $2600. Most of the funds that Autism Speaks raises go to research, but a portion of them also go directly to grants that are reviewed by parents of children with autism. They make an effort to ensure that the funds they distribute can benefit many of us directly. Autism Speaks is truly working to make the world a better place both today AND tomorrow. I know that many of you have helped me in the past when our family has done the Autism Speaks Walks. I am truly grateful for that, and I am asking for your help once again.

Thank you so much. 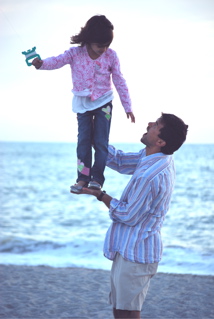 Help Me Help Brooke To Fly