The following was yesterday’s post over at Hopeful Parents. I’m not quite ready yet to bid it adieu, so I’ve reprinted it here.

The Welcome to Holland essay seems to engender some strong reactions, to say the least. As I said in a comment on HP yesterday, “While the original essay rings true for me, I have to acknowledge that the beauty of this life doesn’t exist without pain. BUT, neither does the pain exist without some beauty.”

That’s MY Holland. What’s YOURS? 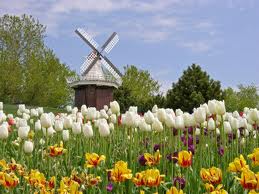 For my Italian friends … The following is based on the beautiful essay, Welcome to Holland, by Emily Perl Kingsley.

And marvel at the overwhelming beauty of the tulip fields

There are the days that I scoff at Italy

Never wondered at the beauty created by Rembrandt’s brush

What they are missing here, I tell myself

How much richer they’d be for a visit someday

For a walk in these wooden shoes

The days that I see past the tulip fields to the mothers wringing their hands, waiting – always waiting

The days that I see the doctors – the specialists and therapists – everywhere it seems, filling the streets, doffing their caps as they move from one house to the next – an endless conveyor belt of service and need

There are the days that I see the siblings, struggling with dual citizenship in two dramatically different nations – neither of which they can fully claim as their own

The days that I send my girls off on the train, backpacks full with supplies for their daily trip to Italy

Knowing that only one of them speaks a word of Italian

There are the days that I watch the planes flying in – filled with mothers clutching their children, looking out the window, ready to point to the Spanish Steps and the Colosseum – knowing they’ll find out soon enough, that’s not where they are

There are the days when I wonder if my girl even notices the windmills, or the tulips – if she knows there are Rembrandts here

Or if she simply wishes that she were in Rome

A place full of love and compassion

26 thoughts on “my holland (reprinted from hopeful parents)”