The plan for today is the Radio City Christmas Spectacular with Uncle Paul and his family. When he first suggested it, we were just coming off of our success at Godspell and I felt emboldened to try. But anxiety is running HIGH this morning and Mama’s confidence is waning. *gulp*

For nearly 2/3 of the first act it was great. And then it, well .. wasn’t – summed up by Brooke shouting, ‘It killed me!’ and Katie sobbing while saying, ‘I just feel like everyone thinks Brooke needs you more than I do and it’s just not true’ (at the same time). Good times. #Don’tKnowUnlessYouTry

I’m trying really hard not to live in anger tonight, but truth be told, I want nothing more than to take autism and its best buddy anxiety out to the woodshed and beat the crap out of them both.

I’m calling a do-over. I bought two tickets tonight to the Radio City Christmas Spectacular. Come hell or high water, Katie is going to get to see that show – with her mama sitting next to her the whole damn time. #WhatWeDoToMakeItRight

Chinese before the thee-ay-ter 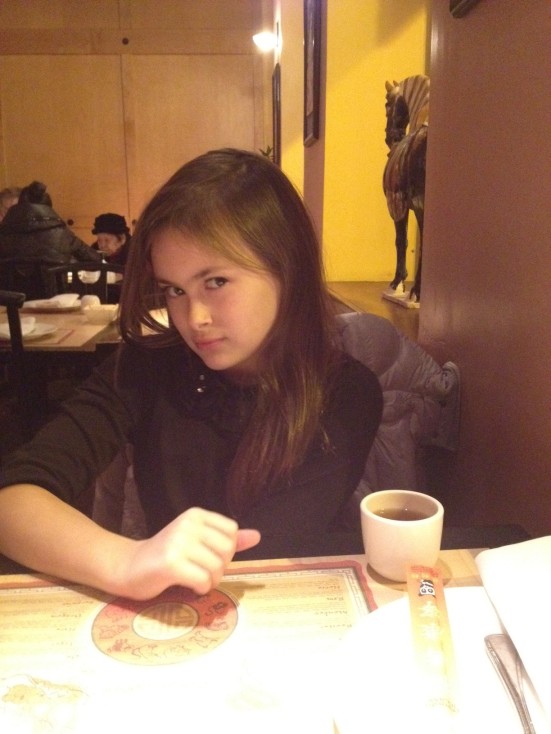 Last night was the night.

The beginning of the evening damn near did me in. Already running late, I left the house in the rain without cash, a coat or an umbrella. I left us barely enough time to eat and in my haste to park I … well … I may or may not have driven Luau’s car into a chain that I didn’t see across an entrance to a parking lot and said chain may or may not have been forcibly dragged across his entire hood, scratching the living $@!% out of it in the process. Maybe.

And I may or may not have even sort of cried a little ’cause it was just too God damn much and I was starting to worry that I was seriously losing my stuffing because I really couldn’t figure out how it was that I could drive a car into a chain without seeing it until it was nearly in my lap.

But this is Katie.

She shrugged, insisted that the chain should have been painted yellow so that people could actually see it, reminded me a thousand times that the garage man said it has happened to other people too and that it was not just dark but raining so ‘it totally wasn’t your fault so please don’t worry about it’ and off we went.

She thanked me again an again for bringing her back. She squealed like she’d won a trip to Hawaii when I told her that yes, she was even allowed to get a soda if that was what she wanted. And cotton candy. And sure, baby, popcorn too. Why not?

Appreciation oozed from her pores.

And we settled in to watch the show – again.

And it was kind of wonderful.