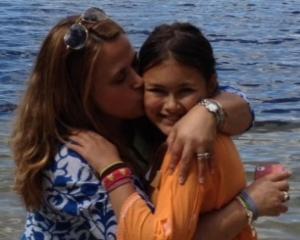 Dropping Katie off at camp – God help me

I’m not ready to write about dropping my baby girl off at sleep-away camp. I just can’t do it yet. What I can tell you is that I have never been more proud of her – for knowing herself, for following her gut, for handling it all exactly the way that she needed to handle it. Which in the end, was far better than her Mama.

Since we’d headed North to drop her off, we decided to just keep going and spend a couple of nights at our favorite spot in Maine. It was lovely. It was weird. I felt like I was missing my left arm.

Shopping around town without my little style critic was just wrong. I found myself missing her more at every stop. Hell, I even missed her complaining that she was bored and asking me to buy everything in sight. Go figure.

Since I couldn’t spend time shopping with her, I spent most of it shopping for her. I walked through town compiling her care package – a heart-shaped rock from the beach, sparkly tattoo pens, nail polishes in various neon colors, a rainbow dyed sweatshirt, a sailor’s rope bracelet, a whoopee cushion. I conjured an image of her giggling with her bunkmates as they placed the whoopee cushion on the seat of some poor, unsuspecting counselor, then ran for the hills. I prayed that she’d made friends to run and giggle with.

Meanwhile, Brooke was out of sorts. Happy as a clam at the beach on day one, by day two it no longer held her interest and she was simply ready to go home. Before we left, we spent a little time at the pool. And there we were when she shivered and demanded of no one in particular, “I need a towel!”

We’ve been working hard on encouraging her independence, so I pointed to the young man near the entrance who handed out the towels. “Brooke,” I said pointing at him, “you can go ask that man for a towel.”

She looked in the direction I was pointing, then back at me. “Which man?” she asked.

“The man at the little desk, baby,” I said. “The one near that big red basket of towels.”

She took a few steps toward him, then stopped.

“Where is the man?” she asked.

I took a couple of steps to meet her, then pointed again. He was only about three yards in front of her, with no one else in the way, but his presence just wasn’t registering.

Still pointing to him, I described his clothing. “See him there, honey? In the white shirt and blue shorts?”

She pointed at him now and followed her own finger for a few steps, then stopped abruptly and turned back to me.

“Just say, ‘Excuse me, sir, may I have a towel please?” I answered.

She turned back to him, armed and ready.

Before she could finish the sentence, the young man had unceremoniously thrust a towel into her chest. Despite the fact that there was no one else around them, his gaze was fixed in the exact opposite direction.

As she took the towel from him, she finished her sentence, determined to see her task through. “… may I have a towel please?”

She turned and walked away holding her towel.

If she had noticed the awkwardness in their interaction, she did nothing to show it.

If he had noticed the awkwardness in their interaction, he did nothing to show it.

I wondered if on any level, they’d recognized something in one another.

My girl returned with her towel, triumphant. And of all the emotions running through me in that moment, the only one I let slip was pride.

In town, feeding Doc, the horse 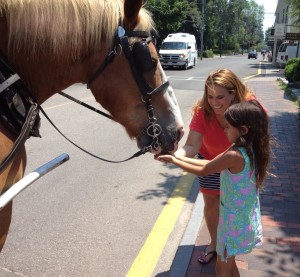 Oh my God, no, you may not pick the horse’s nose, Brooke. 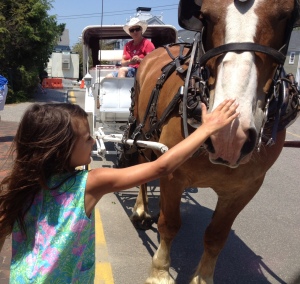