Ever since pre-school, Luau and I have insisted on – and participated in – a LOT of communication with Brooke’s school team. The centerpiece of said communication has always included a school-to-home and home-to-school log book. Each and every afternoon, she comes home with a full report on her day and each and every morning, she heads off with a full report on her night.

About a year and a half ago, her aide began to insist on Brooke’s participation in the communication process. At first, it was rudimentary at best – a small selection of the egg-heads with which we are all so familiar to represent emotions, followed by a couple of choices of typical activities in which she might have participated for her to circle. That was it. And that was HUGE.

By the end of this past year, the eggheads disappeared and the notes became Brooke’s. While they were obviously prompted – and all followed exactly the same pattern every day – there was no missing that they were hers. The emotions began to include things like ‘I felt silly when ..’ and the activities were more like ‘I did the ugly pear lop ala kazools at snack time.’ There was no doubt that they were coming from my girl.

This summer at ESY (extended school year), the practice has continued. However, as is her way, Brooke has begun to put her own twist on what was already well, her own twist. Now it’s even twistier. Or Brookier. While the letters were originally designed as a tool to communicate with us – her family – about her day, she has begun to write them to other kids in the camp with whom she spends her day.

She types the letters, which is something she is growing increasingly proficient at. She loves the time at the computer and is apparently happy as a clam writing to her new friends.

While parents often choose to bronze their baby’s first shoes, I’m seriously mulling over ways to preserve the following. I think you’ll see why.

At camp today I saw a brand new friend named Danny. It was his first time here at camp today. I loved him. He was a good friend of mine. He was so nice. I also did the activities. What was your favorite activity? I liked playground. I felt happy when I rocked on the playground.

There are so many things to love about that incredible letter. So much progress contained within its sixty-one words. So much to celebrate. So with it tucked away in my virtual pocket, I headed home for the day, grinning like a fool.

As it turned out, that was only round one.

When we told Brooke that Katie was going to camp for three and-a-half weeks this summer, she processed it in her own way – mostly by watching an old favorite show – the Blue’s Clue’s episode where Steve ‘leaves for college’, to be replaced on the show by his younger brother Joe. She scripted the show nearly constantly the week that Katie left. It was her way of creating a framework for something that was pretty hard for her to grasp. Pssst … If these kids don’t amaze you yet, you haven’t been paying attention.

She would ask the questions that the Blue’s Clue’s gang had asked Steve. Like Tickety Tock she asked,”Katie, will we still be friends when you go to camp?” Like Slippery Soap she asked, “Can you write us a letter?” She even asked, “But who’s going to live with us when you go to camp?” which led Katie to explain that Brooke would be home with Mommy and Daddy and that well, since we’re not a Nick Jr. show, we don’t really need a new host to come and stay with us.

When I got home from work last night, this was on the kitchen counter. 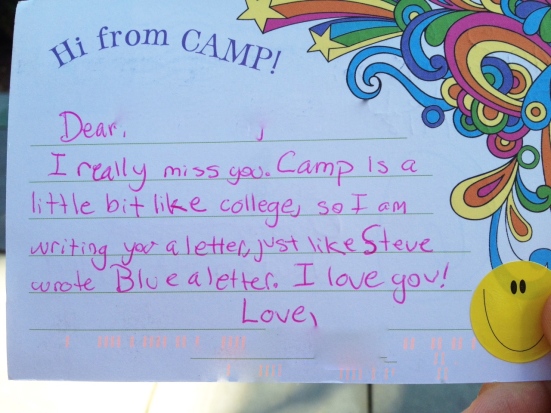 (Reminder, I suck at Photoshop so I can take real names out, but I can’t replace them with anything but smudges. So please just play along and pretend it says Dear Brooke, Love, Katie, mmkay?)

And that is the story of one day, two letters, and one very, very proud Mama.

31 thoughts on “one day, two letters, and one very, very proud mama”