Katie’s concert would be starting soon. Brooke and I found seats in the auditorium while Luau manned the PTO’s pizza sale in the lobby.

Brooke passed the time making a list of names on the iPad. We have thousands of them; the lists. They’re everywhere — soothing, calming, orderly.

We were early enough that the auditorium was still relatively empty. All was well.

And then something happened. Something small that wasn’t small at all. 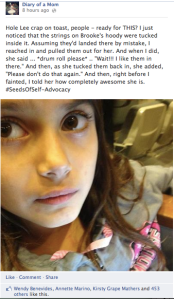 This is what that says …

Hole Lee crap on toast, people – ready for THIS? I just noticed that the strings on Brooke’s hoody were tucked inside it. Assuming they’d landed there by mistake, I reached in and pulled them out for her. And when I did, she said … *drum roll please* .. “Wait!!! I like them in there.” And then, as she tucked them back in, she added, “Please don’t do that again.” And then, right before I fainted, I told her how completely awesome she is. #SeedsOfSelf-Advocacy

.
The concert began. Brooke watched intently. She waved to her sister. She said, “Hi, Katie!” She hoisted herself up in the seat, leaning over me to get a better view.
.
Katie winked at me from the stage as the accompanist began the introduction to my favorite song, then beamed as she sang. “Amazing Grace, how sweet the sound .. “
.
Click.
.
Click.
.
Click.
.
The view was breathtaking.
.

.
And then Brooke began to struggle. God bless the kids, but one off-key .. just one .. and my girl hears nails on a chalk board.
.
This was too much to process, to manage, to hold together. The room full of people, the singing, the movement, the coughing, the shushing, the sniffle, the cleared throat, the toddler off in the distance. It was too much. Too, too much.
.
She tried to stand up, to leave, to run.
.
“Not in the middle of a song, Brooke,” I whispered. “It’s almost over.”
.
“I need to be all done NOW,” she said.
.
Too much.
.
The overwhelm was setting in. She felt trapped. Words were failing.
.
.
She lifted her little hand and brought it down hard on my forearm. I winced at the sting of the blow. “No, baby,” I whispered. “We never hit. I know you’re frustrated, but we never, ever hit.”
.

.
Later, I would write to a couple of close friends.
.
So, you know when your kid hits you and you’re kinda like, whatever, cause yeah, ya know. But then someone says, Did she just HIT YOU? and then suddenly it’s different and bad and really, really not okay? That.
.
I wouldn’t tell them right off that the someone was Luau. I wouldn’t tell them about the look on his face when he said it or how he brought the moment into such stark relief with those five little words, “Did she just HIT YOU?” I wouldn’t tell them that I still felt the sting of the blow on my arm as I typed, but that that wasn’t where it hurt the most.
.
~
.
Later that night, I would begin to write. I would start, as I so often do, in the middle. I’d write in the present tense, wanting, perhaps, not just to remember the moment, but to put myself back into it. The moment when I’d been able to Do Something. The moment when I could Make It Better.
.
~
.
We’re trying to find Katie after the show. The hallway is full and crowded. The walls are closing in.
.
“THERE’S TOO MANY PEOPLE!” she shrieks.
.
She looks to me to Do Something. To Make It Better.
.
I look around, searching. The traffic has bottlenecked right where we are. There’s no easy escape route.
.
I crouch down to her. People have to spread out just a little bit to accommodate my hunched form. I’ve created a little bubble of space around us.
.
I put my cheek on hers.
.
I can’t see her smile, but I can feel it.
.
“Do the Rollers!” she says.
.
And we do.
.
The Rollers — or the Roars — I’m not really sure which — came from Tigger. Tigger says Roller. Which is sort of like Roar. But different. And now, they are a thing. Brooke smushes her cheek onto mine and we say Roller. Or Roar. Or something in between. It’s not something that’s meant to be spelled. It’s smaller — and bigger — than words.
.
And as we Roll or Roar or whatever it is that we do, something magical happens.
.
The crowd falls away.
.
They’re still there of course, but we’re okay. She’s okay. We’ve created an island of comfort in a sea of chaos. .
.
She knows she is safe.
.
And in the moment — in THIS moment — nothing else matters.
.
~
.
Yes, this life is a roller coaster.
.
A big, scary, exhilarating, exhausting, beautiful roller coaster.
.
And it looks something like this …
.
~

23 thoughts on “our roller coaster”