Love is a sacred reserve of energy; it is like the blood of spiritual evolution.

Courage is not the absence of fear, but rather the judgement that something else is more important than fear.

I don’t understand why we’re here. We’ve got to be in the wrong place. I know I asked for help, but an autism specialist? This makes no sense. My baby can talk, so it can’t be autism — right? For God sake, someone say Right.

The waiting room is small. One family comes and goes while we wait, replaced by another. I focus on them. It’s easier.

I don’t remember who was with her – was it her mom? Her dad? I only remember the girl – a young teenager. Fourteen maybe? Fifteen? And the eerie familiarity of that high-pitched hum.

She can’t sit still. She roams the tiny waiting area. Up. Down. Up. Around. Down. All the while, humming her song. I know that song.

It happens in the kitchen. Brooke running like the wind from the den to the office. Hey, silly squealer! we yell after her. It happens in the car. What’s up, squealer? we ask. She doesn’t answer. She never answers. It happens outside in the wind. When she’s free. When that rare look of quiet contentment comes over her face. Hey, happy squealer. we say.

I will myself to look at Luau. Tears roll down my cheeks. He’s been watching too. And listening. He extends a hand, but he can’t reach me. The tiny waiting room is now five miles wide.

This girl is a teenager.

I watch the adult with her – Damn it, I can’t remember anymore – was it her mom? her dad? I watch them reel her in. Keep her safe.

The squeal is sweet and funny and cute. And three.

It scared me for the future. It scared me for the days ahead as these same girls start talking about boys and clothes and music and gossiping behind each other’s backs like I know they will. Like Katie’s classmates do just two years down the line. Like some of these girls already do. It scared me for middle school when the rules no longer make sense and the social scene becomes unwieldy and treacherous for even the most savvy of players.

It scared me for that moment in and of itself. The one unfolding right in front of me.

It scared me because she just looked so God-damned different from everyone around her and because for the first time, I truly wondered if perhaps she knew it.

And then scared turned to sad. And that is where I lived.

Suddenly and without warning, I was choking on the silent scream of impotent rage. For a fraction of a second, I couldn’t see. The room went dark and the air disappeared. I couldn’t move. I had this strange thought afterwards – that I’d wanted to flip the table. Just stand up and turn it over. To cause upheaval, commotion, noise. But as in a slow motion nightmare, I was paralyzed.

Just as quickly as it had come, it passed. The only remnants were the tears on my face and the tension in every muscle in my body. I felt like I’d been in a car wreck.

I get sad. I do. I get sad and I get tired. I get frustrated and weary. But until that day, I guess I hadn’t gotten angry in a really long time. That day, I was ANGRY.

A little boy across the table from Brooke chimed in.

He barely finished the last sentence before Katie angrily shot back.

“Stop making fun of my sister.”

“But she doesn’t even pay attention,” he said. “Watch this.”

He looked right at my baby girl, diligently painting her project and he shouted, “Hey Brooke, DOYNG!”

She didn’t flinch. She kept painting.

“See?” he said, looking around the table at his captive audience. He looked smug, having proven his point. “She doesn’t even pay attention.”

Hot tears ran down my cheeks in the car on the way home. My stomach churned with the bile of anger and fear. Is this what happens at school? Is this Brooke’s life when we’re not around?

The kids are getting older. They’re seeing the differences. They’re seizing on one another’s vulnerabilities. It’s what kids do. Hell, it’s what adults do.

He may be right; she may not know. She may not understand. I’m not convinced. She sees so much more than we think she does. But even if she doesn’t know now, she will. Then what?

Can I protect her from the sting of ignorance?

Bottom line is, I knew she’d be OK. Her aide would be there to support her. She would take her out of the room when it got to be too much. She would be taken care of. She would be safe. I knew all that.

What I worried about was perception.

Yes, I know we’d all like to say ‘Screw it. Who cares what other people think? My kid is my kid and she’s glorious and to hell with anyone who sees anything differently.’ But here’s the thing, my friends. We’ve all gone to school. We all know that perception matters. We are lying to ourselves if we say that a kid’s school experience (especially in a school with only three to four classes per grade) isn’t defined in large part by how they are treated by other kids.

So I worry. I worry because my baby wants to do Deebahs, whatever the hell that may be, and she has no capacity to discuss Polly Pockets or butterfly rings or the things that will likely be of interest to her peers. I worry because these are, in all likelihood, the same kids that she will be in school with until high school. I worry because I remember my child being called names and I know that if she doesn’t see it now, she will. I worry because I can’t not worry.

I watch her, trying not to read too much into her body language. I pray that she doesn’t feel the sting, but I am terrified that she does.

For so long she (seemed to) have the luxury of oblivion. Burgeoning awareness is a double-edged sword.

I kiss the top of her head, wishing that loving her enough could somehow make this all easier.

Luau nudges me from three seats down. “Stay out of the rabbit hole, babe,” he says. “It’s O.K.”

We both know I’m lying. 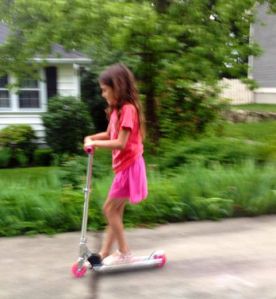 Oh how I wish you could hear the delicious stimmy squeal of delight that my girl makes as her wheels glide across the pavement. And to think there was a time not so long ago that I feared that very squeal because it would *gasp* set her apart from the coveted norm.

Today, I am so grateful that it does, because in all my life I have yet to encounter a greater expression of unadulterated joy.

@A – Brooke is ten, one year away from middle school. so please believe me when I say that I understand and share your fears. But I’d so much rather revel in her joy and in so doing help her to see the beauty in her differences than to allow her to internalize my fears about how they will affect her going forward.

She is different. That is what it is. Her difference is neither good nor bad, less nor more. Just different. She will always stand out — and because of that she has been and she will be teased. It sucks, but for me, the best defense is self-acceptance, self-love and an impenetrable wall of self-esteem built with the bricks of one joyful squeal at a time.

Setting her up to suppress the most fundamental parts of who she is strikes me as a losing proposition, whether she is successful at it or not.

So it’s not that I don’t share your fears. It’s that this is my strategy to overcome them.

It’s taken me the better part of seven years to come to this place. A place that still evolves and shifts. A place where, at times, I still lose my footing, backslide and climb again. A place from where I can still see the deep valleys below, and the mountains yet to climb, but so too where the view — the one right here in this very place — is breathtaking.

My daughter is different. We can teach her appropriate and expected behavior until the cows come home (and we will, for, like it or not, it is in many ways the on-ramp to participation in the community), but she will always be different. One ‘behavior’ will give way to the next and the next again, for her expression of her internal world is not the same as that of most other denizens of the external world.

We can do our damnedest to educate those around her – to sensitize them to difference, to introduce them to other ways of thinking, feeling, experiencing the world. We can appeal to them for empathy and compassion, for recognition of shared humanity and God-willing, convince them to join us in a celebration of the glorious spectrum of human diversity. And we do. Jesus, we do.

And, while we do all that, we can enjoy the hell out of her, not just despite her differences but sometimes even BECAUSE of them. We can revel in the purity of her joy and learn from her how to express our own feelings without pretense, without filter, without worry for how they will be received. We can follow her on a journey that teaches us about ourselves, about our world, about how we connect with one another — and about just how flimsy our social constructs really are.

In short, we can live inside our fear for the future or we can say to hell with it and run alongside her as she blazes a path that leads us unwittingly to our own self-acceptance as we guide her to hers.

And we can invite everyone with whom we come into contact to join us on that journey. An appealing invitation, I dare say, for it leads to a place that is bathed in hope and love and a true sense of connection with one another and ourselves.

A place so damned happy you can’t help but squeal.

37 thoughts on “this place”