I’d been coveting it for ages. I went to visit it periodically, stopping into Tourneau Corner on my way home from work. The attendants came to know me, to smile at me when I came in, to let me try it on, to smile at me again as I left without it.

I don’t remember which birthday it was when my dad presented me with the watch. He gave me exactly the one that I wanted, but without the diamond bezel. I loved it. 30 maybe? I feel like it was a momentous number, but time has begun to round the edges of those memories.

I do, however, remember exactly when it was that I added the diamonds. Katie was but a sprite and Brooke was no more than a sparkle in her Daddy’s eye. It was Valentine’s Day and Luau and I had left Katie with Grammy and Grandpa DD at our house in Connecticut and headed into the city for our first overnight away. We stayed somewhere fancy – the Palace maybe? We had a view of Saint Patrick’s Cathedral. There was construction on the roof. Alas, these are the details my brain keeps.

At breakfast, Luau handed me a Valentine’s card with a check in it.

“I know this is a little odd,” he said, “because, well, it’s your own money, really. But I wanted to give it to you to spend on YOU. Not on the baby, not on the house, not on us, on YOU. I want you to go shopping today, here, in Manhattan, to buy things that you want and to not think about the money.”

As huge as the gesture felt then, I’d have no idea how big it really was until years later when money took on a whole different kind of meaning. Survival. A chance for my child.

Then, it simply meant freedom.

After breakfast, I hit Madison Avenue, giddy with excitement. Of course, when the money is yours to spend it becomes that much more difficult to part with. Suddenly all of the things that I would have sworn I’d have bought like it was my job ten minutes before just didn’t seem worth the price anymore.

Despite my initial reticence, I picked out a few items. Things that I have and love to this day: a Burberry raincoat and a down parka from Searle. And then I walked by the very same Tourneau Corner that I used to visit. On a whim, I went in.

And wouldn’t you know it? There it was — a pre-owned version of  the exact watch on my wrist, but with the diamond bezel that I’d always loved, winking at me from the display case of antique and refurbished watches. I negotiated a trade and walked out with my watch, now diamond encrusted, on my wrist. Even better, it was now a gift from both my husband and my dad, and even, in a round-about sort of way, from myself. I loved everything about it.

Over the years, I tried changing watches, just for fun. I bought a big, gold Swatch that struck my fancy. I wore it twice. I bought a chunky pilot’s number, with a bright blue leather strap, ever so trendy. After a month, it sat on my vanity, never to be picked up again. I tried to go back to older watches that I’d had before, just for variety, something sportier perhaps. No interest. I always ended up putting it back on. To this day, I’ve never, ever seen a watch that I would trade for the one on my wrist. Even without the back story, it’s just, well, perfectly me.

Until I lost it a few weeks ago.

When I gained weight, the watch became increasingly uncomfortable and I would take it off periodically. On one such occasion, it simply disappeared. And I couldn’t find it.

I tried to stay calm. I tried not to panic. I refrained from ransacking my house. I checked my office, in my car, in my purses, under my nightstand, beneath my bed. I looked under the sink, behind the chair in the closet. I still didn’t panic. I was convinced that if I stayed calm I’d find it; if I panicked, I wouldn’t. I went weeks this way, searching a little bit every day, sure that it would come to me.

And then there was the dream on Sunday night. Yeah, I had a dream about the damned watch. And I knew that even if I thought I wasn’t panicking, I was.

I can no longer afford to replace something like this. I would no longer spend the money on it even if I could. I had to find it.

I came home from work on Monday night and began ransacking my closet. I searched handbags, throwing them to the side as they came up dry. I moved furniture. I got down, again, on my hands and knees and crawled along the edges of the floor, under the edges of the clothing hanging in the closet. Nothing.

Luau searched my car. I searched his just in case. Why it would be in either car I couldn’t imagine, but I was running out of places to look.

Finally, I had to ask him to stop. He looked at me like I was nuts (I know, not exactly a shock.) “Trust me,” I said, “for the sake of my mental health, I need us to take a break.” I was angry at myself for my carelessness, frustrated with both of us for our general lack of organization, and, above all, pissed off that the watch wasn’t showing up. I was sweating.

I went upstairs to calm down.

And then I had a thought. More of a vision really. Cuddling with Brooke before bedtime. Taking the watch off and putting it on her night table. I made a bee-line for her room.

She was sitting on her floor, playing a game on her iPad.

“No,” she said, without looking up.

“The one I wear every day?”

And then I saw it. The backpack. The one that she had packed for her trip to space. I could see her, that day a few weeks back, sitting on the floor, stuffing in everything she’d need for a mission to the cosmos. Struggling with the zipper because apparently one can’t overpack for space.

I asked her if it was okay to unpack the backpack.

“Sure,” she said without looking up.

I slowly unzipped the top, praying. If it wasn’t here, I had nothing left.

One by one, I took out the items in the backpack. When i could no longer reach them individually, I dumped what was left. If you ever need to pack for space, here is some of what you will need: 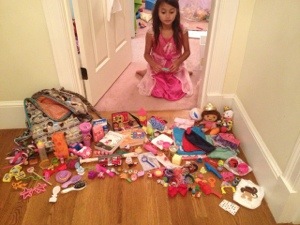 Three hairbrushes, a toilet, a plunger, two kazoos, a hand clapper thing, a magnifying glass, three books, a car, a recorder, a fire engine, a cowboy hat, three shirts, a pair of undies, one pair of pants, a Dora, a Boots, a clown that’s a bear, a cape, Oobie eyes …a pot of flowers, a plastic block, a cake, a trampoline, a piece of red rubber, three hair bows, a LOT of fidgets, a tangled piece of string, three necklaces, three dice (two with colors, one with numbers) two pots of Play-Doh, a Kermit the Frog camera, two kid’s slap watches, a baby bottle, two diapers, a fuse bead monkey, pink star-shaped glasses, an astronaut stencil (duh), a scrunchy, four Leap Pad cartridges … 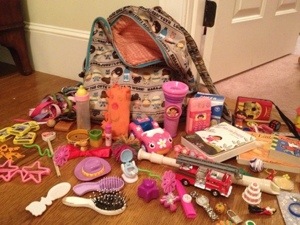 … a rainbow slinky, an autism awareness bracelet (just in case), a pack of band-aids (which is just common sense, really), a walkie talkie, a flashlight, a pencil, a princess eraser, a handful of crowns (for any last-minute alien coronations, I assume), a carrot, a crayon ring, a super ball, a pumpkin, star stickers, a doll’s snow hat, a flower clip, and, finally .. 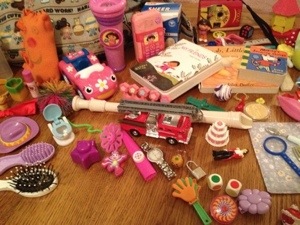 And so it is that my watch is back on my wrist, never, ever, ever to come off again, and Little Miss and I have had a little chat about what is — and what is not — okay to pack for space travel.