“Is this the summit, crowning the day? How cool and quiet! We’re not exultant; but delighted, joyful; soberly astonished. . . Have we vanquished an enemy? None but ourselves. Have we gained success? That word means nothing here. Have we won a kingdom? No. . . and yes. We have achieved an ultimate satisfaction. . . fulfilled a destiny. . . To struggle and to understand – never this last without the other …”

“If you are faced with a mountain, you have several options.
You can climb it and cross to the other side.
You can go around it.
You can dig under it.
You can fly over it.
You can blow it up.
You can ignore it and pretend it’s not there.
You can turn around and go back the way you came.
Or you can stay on the mountain and make it your home.”

It was 1998. Luau and I were so newly engaged that I hadn’t yet insured my ring. I remember because my second thought when a friend suggested that we join her for a trip to Chile and a hike to the top of a volcano was, “Oh my God, what if my ring falls in?” Cause yeah, ya know, logic.

We’d been planning a trip to the Grand Canyon. I had it in my head that seeing the Red Rocks of Sedona, riding a mule on (not really) treacherous trails and rafting the white water of the Colorado River would be The Coolest Trip Ever. But our plans hadn’t completely gelled yet, and when presented with the opportunity to hit South America with someone who had already done all the pesky legwork, it was hard to say no. Besides, it was sort of like going to the other place that I was convinced would be The Other Coolest Trip Ever, Machu Picchu. That was next on my list of what would be our once-a-year-forever adventure travels. Right after the Canyon. And of course that’s exactly how life worked out. Ya know, except exactly not.

But there was Chile. And Villarica. And an expedition company. With ridiculous looking matching snow gear. And cleated ice boots. And ice axes. Yes, really.

And with fifteen or so of our newest best friends, we hiked out to, then climbed, the volcano.

We were given ground rules.

Stick together. Help one another. Be aware of those around you; make sure they’re okay, that they’re lucid. They might not know if they’re not.

Make sure to drink water, even when you think you don’t need it. Your mind plays tricks on you up here, they said. You’ll have to make a conscious effort to take care of yourself. Once you feel the thirst, it may be too late.

They told us how to climb. At first I thought they were kidding. Dig into the ice with one foot, plant it firmly in place, then bring the other boot to the instep of the first. Repeat.

It became obvious rather quickly that the method was not by design but necessity. It was impossible to move any faster. Progress happened … one … half .. step … at … a … time.

Even so, we had to stop periodically to drink or simply to lean on our ice axes and wait until we’d gathered enough energy to continue. And we had to check our egos at the door. There are no points for style on a volcano.

And as we trudged upward, he told me that his mother had once given him the advice that when a climb is overwhelming, it’s best to watch your feet rather than to look up and allow yourself to be daunted by the distance to the summit. I laughed, thinking that surely she hadn’t meant the advice literally. But there we were. And it made an awful lot of sense because every time I looked up I just wanted to curl up and cry. So I watched my feet.

Check in, look around. Take in the view. Kiss the guy in the goofy matching snow gear. Feel for the shiny new ring under the glove. Don’t look up. Do. Not. Look. Up.

By God the air is thin up here.

And what is that fog?

Jesus, I don’t even know where we’re headed anymore, other than up. I can’t see anything.

Looking up is pointless anyway when you can’t see where you’re going.

And then it happened.

The people just ahead of us on our snaking line began to hoot and holler.

I looked up. And then down. And then out at the horizon.

And everything looked different.

The only thing that was instantaneous about it was the dawning of the realization.

The fog wasn’t fog. It was the cloud line. We’d passed through the clouds.

Luau tapped me on the shoulder.

And so we had.

One step at a time. 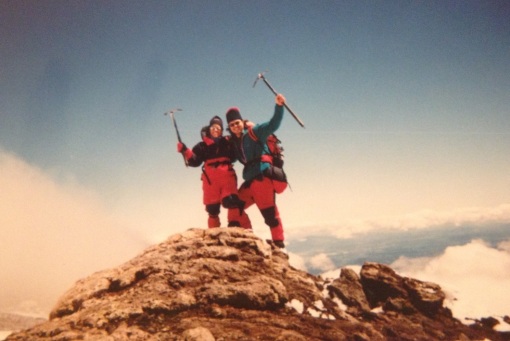 So, you see, my dear friends, the place you end up may be different from the place you thought you were headed. It may not be the Grand Canyon and it may not be Machu Picchu. Hell, it may be fifteen years later and you’ve still never been to either of those places, nor ridden a mule up a not really so treacherous trail, nor rafted the white water of the Colorado River, but you know what? Come closer, cause I really want you to hear this, okay? When you get through the clouds, you will know one thing if one thing only …

You have done something that mattered.

And so too, you’ll know that those other places aren’t going anywhere. And that dreams don’t expire. And you’ll come to believe that as long as you can keep digging and planting and dragging and stepping and stopping and resting and looking out for your friends and making sure that they look out for you, and that when you find yourself in the fog, you can keep moving with the faith that you will get through the clouds, you will see those places someday. If they still hold the allure that they did before. Because dreams change. And you’ll know that that’s okay too.

Look out for each other, my friends.

But no matter what, stop to take to care of yourselves (before you think you have to.)

And when it gets to be too much, watch your feet for a while.

And know that eventually, when you least expect it. you’ll come through the clouds.

12 thoughts on “yes, virginia, this is a metaphor”