Katie has one of the leads in her school’s Fall play. Excited doesn’t begin to describe how she feels about it. Talk of rehearsals and the antics of the cast and crew have dominated dinner conversation for the last six weeks. She can’t wait.

The play opens tomorrow night. This is what’s known as Tech Week, or, to those in theater, the week when everyone gets sick because they’re so exhausted from endless rehearsals, last-minute tweaks and the attendant running around like beheaded chickens. It ain’t pretty.

Family and friends have their tickets ready. Grammy is driving up from Connecticut tomorrow. Aunts and uncles are coming. Even some members of the family we weren’t born with but chose along the way will be there. Yup, Miss Alysia and Gerry are coming.

And Brooke is coming.

Following the significant challenges .. okay, debacle, of the last show, we came up with a plan. Our sitter would be coming along with us. That way if Brooke couldn’t sit through the play, Julie could take her for a walk without me or Luau having to leave in the middle of Katie’s performance. I thought it was a pretty good plan.

And then yesterday, in the middle of the afternoon, I got a text from Katie. 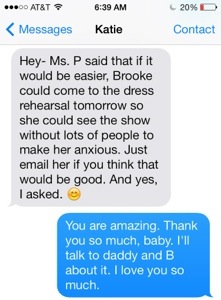 So our pretty good plan has now been replaced by a really good plan. Today, after school, Brooke, Luau and I will see Katie’s play. The cast will get a ‘practice audience’ and we will get a private show. Because my kid thought of a way to make it work.

There’s a lot of talk about how hard autism is on siblings. And at times, it is. That’s undeniable. But you know what else is undeniable? The fact that, just as with everything else in this life we lead, there are gifts wrapped in the challenges.

My child is growing up to be one of the most thoughtful, compassionate, genuinely accepting people on the planet. And no, it’s not all because of her sister. It’s who she is. But the fact that her life with her sister is what it is, the fact that she had to learn early that authenticity means more than appearance, matters. The fact that she learned out of the gate that everyone has a story that’s worthy of telling, even if the telling takes some extra time and effort both to tell and to hear, matters. The fact that she was shown day in and day out that a successful life requires working with those around us, thinking outside the box to leverage each other’s strengths and mitigate one another’s challenges, matters. The fact that she has learned through experience that everyone has something beautiful to contribute, and that it’s up to all of us to ensure that they have the chance to do so, matters.

My twelve year-old daughter thought of a way to have her sister see her play.

23 thoughts on “what matters”