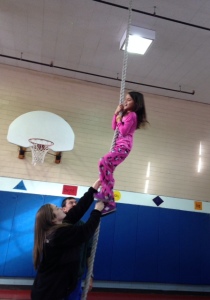 The other night, I went to a small group teach-in run by a Special Education attorney. I both love and hate things like that. I love them because I have found that there is no more powerful tool than information when advocating for my child. I hate them because, well, they can be pretty messy emotionally.

I learned some really important things. I learned that Massachusetts law very clearly states that “school districts must write an IEP and provide the special education (FAPE — free and appropriate public education) necessary to meet our children’s unique needs that result from autism spectrum disorder (academic & social / emotional needs).” (Parentheses theirs, Emphasis mine.)

It also says that “the IEP team must consider the academic, developmental, and functional needs of the child in developing the IEP.” (Emphasis theirs.)

I also learned that transition planning starts at age 14 and that the team (which, at that point MUST include the child, though they can attend meetings long before their presence is mandatory) is required by law to develop a post-secondary school vision statement based on the child’s strengths, needs, preferences and interests around employment, independent living if possible, and community participation. The vision statement must then be translated into measurable goals and objectives and include a plan to achieve those goals. The team is then required to update the plan annually as the child works toward transition.

I also learned that standardized tests (the MCAS here in Massachusetts) really don’t mean diddly squat until tenth grade. Which was nice to hear on a lot of levels.

And then I learned something else. Not about the law or my child’s rights under it, but about myself and my view of the world and my child’s place in it. About my thinking and how it’s evolved.

The attorney was presenting case studies for us to consider. The details don’t really matter for this discussion and since they’re about real kids, I’d prefer not to get into them. But in one case that we discussed, a very young child’s parents were pushing for a more specialized program. Reframed, one might call that a less inclusive program than the one he was in. It was clear that he was not making sufficient progress, even in the school’s substantially separate classroom. The parents wanted to place him in an out of district program. While discussing the case, the attorney said something to the effect of, “Of course, this is somewhat backwards, as typically we look to move our kids INTO mainstream classes as they progress.”

I sat quietly and tried to listen as she continued to talk, but the ringing in my ears grew louder than her words. I watched the other parents, mostly with younger kids, taking notes, scribbling down the gospel. I wanted to do something, say something. I wanted to scream.

As we evaluate programs for Brooke for next year, it becomes more and more obvious to me (Luau, to his credit was miles ahead of me on this one) that my child needs to get the hell out of the mainstream. Even the word feels overwhelming – the main stream – a flowing, thrashing, churning body of water moving along at a current that is NOT LIKE HERS.

She is currently in an integrated classroom. We’ve described it as the perfect setting for her: a special education teacher, a general education teacher, a classroom aide, and of course, her fabulous one to one aide, Ms J. But the more that we hear from the team, the more I ‘m thinking that it’s nowhere near perfect. Don’t get me wrong, the teachers are beyond fabulous and Ms J, is well, Ms J, and it doesn’t get much better than that. But Brooke spends far more of her day either outside of the classroom for speech and social pragmatics and the one to one academic instruction that she so desperately needs — or in the process of transitioning into or out of the room. When she is in class, she’s often working on something different from her peers, usually because the work had to be modified for her in order to be accessible to her. And she feels it. She HATES missing what her classmates are doing. At our middle school transition meeting the other day, her anxiety about always coming, going, and doing different work was the running theme as each member of the team gave their updates. It was hard to hear.

My girl is essentially 3 years behind grade level. She is making wonderful progress. But so are her peers. They’re not standing still waiting for her to catch up. Besides, how often do we say that autism doesn’t make for a slower journey along the same developmental path but for an entirely different trajectory? So “catching up” isn’t a realistic goal either when she’s running off in a (beautifully) different direction. And that’s okay. It has to be. But why, when it comes to school, are we trying so hard to force her onto the same path as everyone else? It doesn’t work. And it hurts her.

This idea that we all should be working toward the goal of mainstreaming our kids is, frankly, bullshit. And here’s why.

Above all, we want to see Brooke broaden her arsenal of tools, skills and strategies and use them to be a happy, social and confident child who enjoys life and all of its experiences.

The way in which that happens and the settings in which that happens are the HOW not the WHAT. If my daughter were to be repeating fifth grade for the rest of her life, it would probably be pretty reasonable to work toward removing supports over time and moving toward a mainstream version of the class. But she’s not. She’s moving along, forced onto this path that doesn’t mirror her own, with kids who are continuing to fly past her at the speed of light because the pavement was built for their kinds of tires.

She’s keeping pace beautifully, mind you, but it’s HER pace, not theirs. And she’s on her road, not theirs. So this whole idea that as the work gets harder and the demands for independence get ever greater, she should somehow be magically able to engage her turbo thrusters and dive into the mainstream strikes me as pretty destructive. I know better than to sell her short, mind you. There is nothing my kid can’t do with the right support and encouragement. But the more I hear about her day, the more I realize that we’ve been putting her in a position where she is always, always fighting the current. It’s exhausting. And it’s not fair to her.

So when I hear that the goal is to remove supports and to move our kids into the mainstream as they progress, I think, “Not always.”

For us, it’s time to find a place where our girl can learn without having to fight.

Ed note: I’m grateful beyond words for Brooke’s teachers and the team of staff members who support her. They do an incredible job day in and day out. It’s clear that they don’t just teach her but value her, celebrate her, care about her. Even if the setting isn’t perfect, they pretty much are.

61 thoughts on “not always”