Does the autistic child have a theory of mind?

According to Simon Baron-Cohen the core deficit of autism is the autistic person’s inability to employ a theory of mind.

It is argued that a child develops a theory of mind between 4 and 6 years of age. Although some evidence has demonstrated that children as young as two have a theory of mind. Having a theory of mind is the ability to understand that other people have independent minds of their own.

Developing a theory of mind allows the child to begin to understand other people, and to predict what other people are likely to do and believe. It is the ability to think about other people’s, or one’s own thoughts.

Baron-Cohen argues that autistic people do not seem to develop a theory of mind. 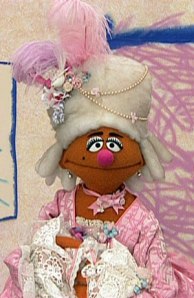 {Image is a photo of Talulah* the opera singing muppet from Elmo’s World. *Not her real name.}

As soon as I picked Brooke up from her sleepover at Ana’s house, she made it clear that she had a plan. We were to head straight home to watch Elmo’s World. She’d had a wonderful time. She wanted to do it again. And she desperately needed the comfort of routine.

As we sat watching the parts of the show that she’d cherry picked for viewing, she asked about Talulah.

I have no idea if that’s really her name, but it’s what we call her. That or, “The opera lady.”

She’s an opera singing muppet one of the Elmo’s World videos and Brooke can’t stand her. Which is quite stunning progress, really. as she used to be terrified of her. I much prefer “can’t stand” to “terrified.”

She asked me one day if Talulah liked her. I said, “I’m sure that she would if she knew you.” She said, “But she doesn’t know me, so she doesn’t like me.” It was hard to argue with her logic.

As we watched Elmo sit down to the piano to sing about Heaven knows what, Brooke launched into the script. “Does Talulah like me?” she asked.

“Would she like me if she knew me?” she asked.

“I can’t imagine that she wouldn’t, kiddo.” I said truthfully.

This was new. I wasn’t sure where she was going with it.

“Because she thinks I’m a stranger,” she said.

Could someone please get Dr. Baron-Cohen on the phone?

I think my daughter just told him that he can put his theory where the sun don’t shine.