Bits and pieces of disorganized thought swirl through the air. If I’m not careful, they land on my skin, burning, then numbing, then burrowing like shrapnel, just deep enough to pretend that ignoring their existence can work, just deep enough that it can’t.

Middle school. My baby girl is off to middle school in three weeks. It’s times like these I wish I believed – really, truly, fervently believed, that without a doubt, if I offered up my fear Someone would be there to take it.

Robin Williams’ death hit me hard last night. When you have a disease of the mind whose defining feature is the ability to convince you that you don’t have a disease, life is a whole different kind of Hard. It was always so clear that his torment and his humor were two sides of the same coin. Beauty and pain may seem unlikely companions, but while we are conditioned to believe in the concept of mutual exclusivity, nothing exists without everything else, even its opposite. There is pain in beauty and beauty in pain. There is even laughter.

This is what I posted last night … 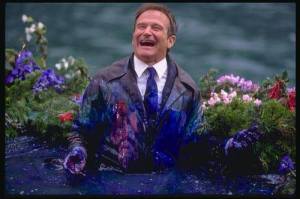 “A whole human life is just a heartbeat here in Heaven. Then we’ll all be together forever.” – Chris (Robin Williams) in What Dreams May Come

Remembering a beautiful soul tonight. A man who made us laugh and cry and think. Who made our world funnier, more vibrant … more.

May he rest in peace, and may his family feel the love of so many who grieve with them tonight.

If you or a loved one need help, please, please call the National Suicide Prevention Lifeline at 1-800-273-8255. No matter how big it feels, you can get through it. I promise.

A post sits in my draft box, where I’ve decided it should, at least in its totality, stay. But the words gnaw at me, convinced they matter, begging for release. This apparent topic change — isn’t.

This is precisely my issue with this particular kind of behavioral approach (and I don’t mean ABA as a whole, I mean ABA practiced this way). Often (not always, but often) it veers into this territory – where the behavior (outer expression) is all that matters and we think that once the behavior is gone, the reason / motivation for it must have magically disappeared with it.

This approach completely ignores the reality of the child’s inner life.

Now, perhaps there’s a better way for her to express what she’s feeling or to get the reassurance that she needs without having to ask for it during class. I have NO problem whatsoever in using a behavioral approach to help her find and use that better method of communicating her needs.

But extinguishing the behavior isn’t doing that. It is pretending that if we simply teach her to stop asking for reassurance that we’ve taught her to stop needing it. And we haven’t. By ignoring her until she’s “extinguished the behavior” without giving her an alternative method of communication, what we’ve taught her is that we don’t really care how she feels – just how she acts.

There are so many more words – about the nature of anxiety and perseveration and the need to be heard. About the fact that we can train our children to appear successful and in so doing fail them dramatically. Words like these ..

I can teach Brooke to stop asking about the firemen by routinely and consistently ignoring her when she does. I can condition her to stop scripting during class by refusing to engage her in a script until a certain time. But neither of those things stops her from worrying about whether or not they’ll come, or making associations to scripts that she feels compelled to think through to their end and for which she will continue to, in one way or the other, seek closure. So while she appears to be successful because by no longer asking about the firemen or attempting to engage us in the script she is giving the outward appearance of no longer being worried about them and no longer perseverating on Max, I can assure you, neither of those two things have occurred.

While we might have seen with our own eyes this incredible success story, here’s the real story.

Brooke is coming home at night and tearing at her skin, pulling her clothing threadbare and bursting into tears at seemingly random times because anxiety doesn’t go away when we stop expressing it in one particular way. She is still sitting in class wondering what is expected of her and trying desperately to parse the words that are falling on top of one another in messy, chaotic piles and trying, trying, trying to catch up and getting frustrated and angry and feeling like she “must just be stupid” because her brain doesn’t shut off the script because we refuse to engage it.

The outward appearance of success is based on a neurotypical model of behavior and has absolutely no bearing whatsoever on the inner well-being (or inner havoc) of the child.

When we measure success solely by outward appearance, and we judge that outward appearance based upon an NT model of what behavior means, I believe we’re way off the mark. And as the mama who holds her girl as she tears at her skin and pulls at her clothing and cries before bed, I’m sticking to my guns. Her long-term emotional well-being means a lot more to me than any short-term NT version of success.

I didn’t — I don’t — want to put the words here today because I don’t have the energy to debate their veracity or to argue the finer points of behavioral intervention. I just don’t. But like toothpaste in a seemingly empty tube, there’s always something in there. I’ll find it for my girl. Because the words are right. They matter. Success isn’t always what it seems.

In the meantime, life marches on outside of the swirling thoughts and the burning shrapnel and the unanswerable questions and joy and remembrance and grief.

Brooke continues to prepare for my surprise party tomorrow. The one about which she’s told me every detail. The one for which I took her shopping yesterday when I posted this .. 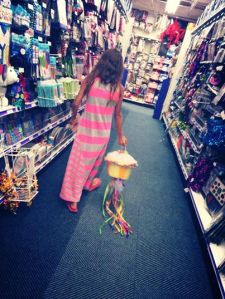 Brooke needed a ride to the party store. To get the supplies for the birthday party that she is throwing for me on Wednesday. Which is a surprise. And I’m paying for all of it. But shh, Don’t tell me.

{image is a photo of Brooke walking down an aisle at the party supply store carrying the piñata that she chose for my surprise party, which is shaped like a giant cupcake (I mean, what else would it be?). Apparently, the party theme is Hello Kitty, in case you were wondering. So she picked out Hello Kitty plates and cups. She also chose four gifts from the toy aisle and put them in a bag and told me that I was (allowed to buy them but) not allowed to look at them.}

I’m pretty sure this is going to be the best birthday party I’ve ever had.

Last night she filled the pinata. And asked me for help putting together the box which she then filled with my gifts. And then she arranged the guests. 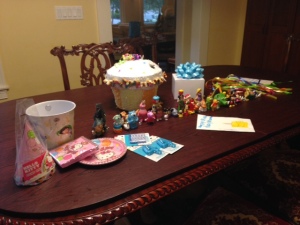 {Image is my kitchen table (actually the fake wood pad on top of the table that is supposed to be covered by a tablecloth but whatever) upon which sits a LOOOOOOONG line of figurines (my party guests) along with the box containing my mystery gifts, a hand drawn card, a pile of ribbons (I’m told they’re confetti), the pinata, which she spent last night filling with foraged goods from around the house, a Dora bucket, presumably to hold the pinata loot, Hello Kitty napkins, plates and birthday hats, two glittery “4” candles along with a package of regular candles, and a script of the birthday song that she’s written for everyone to sing. I reiterate, this is going to be the best surprise birthday party ever.}

And we did this … 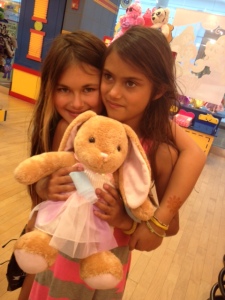 {Image is Katie and Brooke holding Bunny, the bunny they made at Build-A-Bear yesterday for their as-yet-unborn cousin, whom Brooke has decided will be named Deedles. (Not the bunny, the baby. I don’t think my sister is going for it, but Brooke is undeterred.}

We went to Build-A-Bear to thank them for listening to and supporting the autistic people who asked them to end their partnership with Autism Speaks. Given that if we get one more stuffed animal in our house the folks from Hoarders are bound to show up at our door, we made a bunny for my niece, who is due in early 2015.

Lastly, Katie gave me her Christmas list last night. In August, as you do. 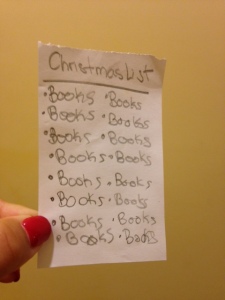 {image is a photo of Katie’s Christmas list. On top of the page it says, “Christmas List,” cause she’s brilliant like that. Underneath that header is one word, written sixteen times. That word is “Books.” Clearly she knows what she wants.}

With a stark reminder today to delve beneath the surface with those we love.

To prize and honor not outward success but inner well-being.

To know that this isn’t where our stories end, but where they go on.

No matter what people tell you, words and ideas can change the world.