I woke up late this morning. Even before I’d opened my eyes, I felt it in the air – heavy, slow, dense.

Even as my girl crawled into bed with me and launched into the middle of a script – always start in the middle and it will be the beginning – I moved as if in thick, brackish water.

The news is too much.

An autistic teenager is doused in feces and urine in Ohio. A crude prank, they called it. A cruel joke.

I want to curl up and make it go away.

What kid could ever, ever deserve that?

I walk through the hallways of Brooke’s middle school. I am wary. Afraid. I see one of the kids from her substantially separate class. He is wearing a t-shirt that catches the eye of some boys in the hallway. They stop him and say something. I freeze in my tracks and watch. I can’t hear them over the din, so I watch their body language. I can’t tell what’s happening. I exhale as they all go separate ways.

I wasn’t afraid before.

In Florida, an autistic sixteen year old is invited to a party where he is beaten, then forced to walk to the spot where he finally collapses.

He thought they were his friends.

I want to throw up.

Yesterday, Katie excitedly told me that she’d seen Brooke outside her school when she was at PE and Brooke was outside.

I asked if everyone had been outside. A fire drill, perhaps?

A plea bargain. Probably a good thing to spare the family – to spare Issy – the unthinkable pain of a trial. Of hearing the details of how her mother tried to kill her.

So yeah, avoiding trial is good.

The air in the room is nearly unbreathable.

“Will you come watch it with me?”

It’s an invitation I can’t refuse.

I take one more look at the screen in front of me.

I don’t know what to do.

Fires burn out of control.

We are afraid to ask for help.

We are afraid to say that we’re not okay.

And that’s the most not okay thing of all.

I read the words that I wrote last night, searching them for something.

For various reasons (that I have no intention of rehashing here), this has been a rough couple of days for our (extremely loosely defined autism) community. The truth is that we are broken. And that we have been for a long, long time.

We have been hurt. We have hurt each other. We have hurt ourselves. Worst of all, in so doing, we have hurt our community’s children — OUR children. And they deserve — and need — better if they are to survive. Literally.

In one of my favorite songs, Pat Green sings, “When the wolf is at the door / You don’t have to guess what I’m against / If you know what I’m for.

You know what I’m for here.

The universal right to SAFETY.

Which can only be realized as a result of our full, absolute, unquestioned recognition of every single human being’s …

We can do this.

We can make it better.

Let’s, just this once, show the rest of the world how it’s done.

Whatever it is that I’m searching for, I don’t find it.

I pray that this helped. “Even if one thing resonates,” I’d said, “it might help to view his environment from a different perspective.”

I see a new comment following mine. My dear friend, Ib, to whom I’d turned last night for help.

You have done the right thing by being real with yourself and safe enough others, not trying to “be a hero” which heartbreakingly does not end well. Honesty wins and I am praying for you.

I am an autistic adult who in a way understands. It is possible to reorganize violent impulses – though difficult – but much more difficult alone, or living in a sea of lies. You are making all the right choices to speak up and seek community now.

If you want to contact me privately, I care to listen.

I care to listen, she said.

Love and Solidarity, she offered.

The weight begins to lift.

I hear Elmo start, then pause. I go to close the laptop, but a note catches my eye. You might want to share this post it says. I flinch. The posts that have found their way to my inbox in the last 24 hours have not been ..

I let the thought drift as I read.

Leo is happy. We don’t hear this enough about autistic kids, since messages about autism tend to center on pity and prevention. Of course many parts of Leo’s life frustrate him, as when he can’t communicate with others fluently, which limits his independence. But overall, he is a contented kid.

I hear my girl’s happy squeal echo through the kitchen, as she makes her way to the den.

I close the laptop and leave it behind.

I sit with her on the couch, reveling in the gift of sharing these few minutes before we will walk to school. Today marks the last day of my two-week vacation from work. The last of these glorious opportunities. I try not to think about their end.

Elmo is talking about skin. Brooke rubs my arm. “This is the skin you’re in,” she says. “You should love it.” It’s a delicious play on one of her favorite books.

Elmo is now moving at triple speed as Brooke fast forwards to find whatever it is she seeks.

She giggles as he gets ready to open the door. She pauses the television. “Watch this!” she says.

I smile. My God, I will never, ever tire of those words.

I promise her I’m watching.

Elmo goes bug-eyed as cameras flash in his face. Brooke pauses the television. She’s laughing too hard to speak. “Look … at … Elmo!” she says.

Her laugh is contagious. I can’t help it. I crack up.

There’s something on the screen, Mr. Noodle chasing down a camera-shy piece of cheese, a talking stalk of broccoli … but I’m watching Brooke.

Her laughter rolls over me in waves. I dive in.

Thank God for that laugh.

I suggest that next time we take a picture, we should say, “Broccoli.” She agrees, and hands me my phone.

“You don’t have to ask,” she says. It’s a script from somewhere. Probably Elmo. I don’t know and I don’t care.

We take pictures. We make funny faces. We laugh. We say, “Broccoli!” We laugh some more. 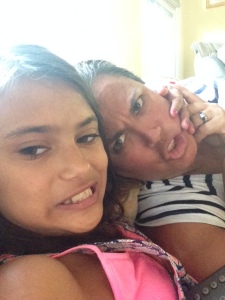 {images are very silly selfies of me and Brooke making funny faces and saying, “Broccoli.” I highly recommend it.}