As I’ve said in Halloween posts of years past, All Hallows Eve is the highest of holidays chez Brooke. It is the one day of the year for which we spend the other three hundred and sixty-four preparing. It is the one day that my girl’s all-time favorite activities are socially acceptable.

In short, it is the day that she can be herself in all her absolutely fabulous Brooke-ness and no one looks askance.

You getting this now?

This day is MADE for my kid.

The days are long, but the years are short.

Katie was flying solo. She was a mouse. She didn’t have a lot of say in the matter at the time, but I have to say, she doesn’t look particularly unhappy with my choice. 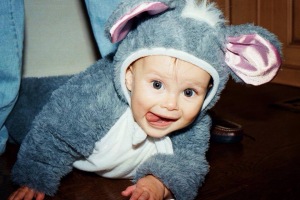 {image is a photo of Katie dressed as a mouse on her first Halloween. Just for good measure, her tongue is sticking out.}

Katie was, in my clearly unbiased opinion <sarcasm>, the cutest little chicken ever. Years later, Luau would casually mention that this was actually a rooster costume, as evidenced by the cock’s comb on her head. I refuse to let facts muddle my memories of this Halloween, on which my daughter was, ahem, the cutest little CHICKEN ever.

{image is a photo of Katie dressed as a chicken. She is holding the Tootsie Roll that she’s just been handed as though it is the Hope Diamond.}

Brooke’s Halloween debut was as a slice of watermelon. Or, if you want to listen to Luau, a strawberry. Feel free to weigh in on who is right and why he’s wrong.

{image is a photo of Brooke as a very pink slice of watermelon. There, now it’s on the Internet, so it’s an incontrovertible fact. <more sarcasm>}

Katie was Cinderella. I think we can all agree that she was very, very royal. Doesn’t she just look like she’s awaiting the royal carriage from which she will wave with no more than a turn of the wrist?

{image is a photo of Katie as Cinderella.}

Brooke was a clown. I can’t even take the cuteness of this.

{image is a photo of Brooke dressed as a clown. I find it impossible not to smile back at her in this picture.}

Katie was a cowgirl. A very pink, very sassy, ridiculously adorable cowgirl. There should definitely be sawdust on the floor here.

{image is a photo of Katie in her ropin’ gear. I’d gone to Nashville that year and, well, I may have gone a little overboard.}

Brooke’s long-abiding love for Dora the Explorer and her sidekick, Boots the Monkey was just beginning. Little did we know that nine years later, we’d still be avid fans. 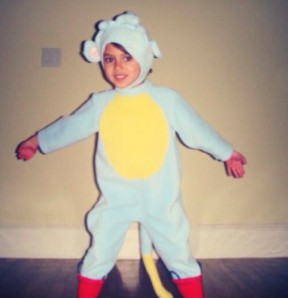 {image is a photo of Brooke grinning in her Boots costume, complete with, well, boots.}

On a trip to Disney World that year, we’d told Katie that she could buy one thing to bring home. This is what she chose. 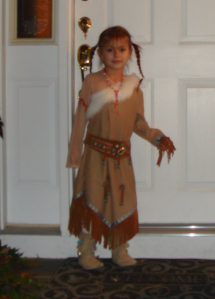 {image is a photo of Katie as Pocahontas}

Brooke was Boots. Again. I think this photo might be another from 2005, but let’s just pretend.

Katie was Belle that year and it seems that the only photos we have of her in the costume are currently being held hostage by our non-working desktop computer. Once we can unlock its treasures, I’ll add Belle. 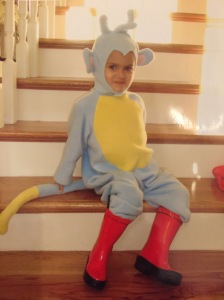 {image is a photo of Brooke as Boots. Again.}

{image is a picture of Belle. Katie looked like that, but way cuter and with a waist large enough to house actual organs.}

This was the year that Katie decided to get creative. Really creative. “I want to go trick or treating as a girl in a bed” creative. Yeah, this took a little work.

Brooke, on the other hand, chose a character from what was then a long-cancelled Disney series, JoJo the Clown. Thank God for eBay.

Oh, and I actually got ONE photo of BOTH of my girls that year. Score.

{image is a photo of the girls getting ready to trick or treat. Katie is dressed as a girl in a bed. She is wearing jammies and is attached to a cardboard box that we’d spray painted brown and cut into the shape of a headboard and onto which we’d then tied a small pillow. A piece of quilted fabric is draped over her and tied to the cardboard so that it looks as though she is lying in a bed. Brooke is dressed as JoJo the Clown.}

Brooke wanted to be Ming Ming the Duckling from the Wonder Pets. Ming Ming costumes went up to size 3T. So we had to get creative. I mean, not girl-in-a-bed creative, but it took some doing to pull this one off.

And Katie? Well, she decided to be an elephant. As you do. 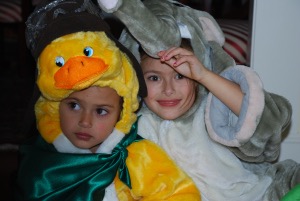 {image is a photo of Brooke as Ming Ming and Katie as an elephant.}

{image is a photo of Ming Ming and the elephant taking off to trick or treat, hand in hand.}

Once again, Brooke found the one character in a show (The Backyardigans) for whom costumes just didn’t exist. Tyrone? Sure. Pablo? Yup. Tasha? Not so much. Thank God for Miss T, who, after knowing Brooke for six weeks that summer, made this costume. I know. I totally, completely know.

Katie, on the other hand, took creativity to new heights that year. She was a washing machine. Yes, really.

{image is a photo of Brooke as Tasha and Katie as a washing machine.}

Katie was determined to be a lamp. A working lamp. Like, a lamp that you could turn on while trick or treating. A bed I can do, but I pass on electricity, thank you. So she went with plan B, which she called a bird who went to Vegas to become a showgirl. Right. Moving on.

Brooke was Foofa from Yo Gabba Gabba.

Brooke wanted to be Sally from Charlie Brown. As much as she’d wanted it, she wasn’t big on wearing the big foam head thing, but we did at least managed a picture.

Katie went back to the mainstream that year with the Queen of Hearts. 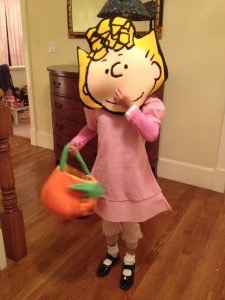 {image is a photo of Brooke as Charlie Brown’s little sister, Sally. I love that she always picks a slightly obscure character. It’s just so deliciously her.}

{image is a photo of Katie as the Queen of Hearts. Don’t you just love the crown?}

2012 was the year of the Griswold Halloween. Everyone participated, some more enthusiastically than others. That’s right, Lucy, I’m looking at you.

{image is a photo of Katie as Elmo and Brooke as Big Bird. I’m warning you now, this is about to get embarrassing. Really really embarrassing.} 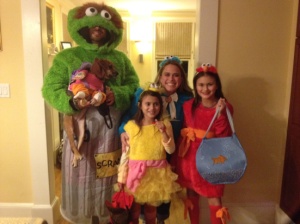 {image is a photo of the whole family dressed for Halloween: Katie as Elmo (holding her Dorothy in her fishbowl treat bag made for her by our amazing friend and über talented costume designer, Miss Kimmerie), Brooke as Big Bird (carrying her Radar the teddy bear treat bag, also by Kimmerie), me as Cookie Monster, Luau fully committed to Oscar, and Lucy, totally mailing it in as Dora. Winston was too cool for the picture, but I think he was dressed as a punk rocker, which would explain the attitude.}

Brooke, tenaciously sticking to her plan of choosing costumes one cannot buy, decided to be Daisy Duck. So I called Kimmerie and, as always, she came through … big.

Katie, on the verge of being “over” the whole Halloween thing, was a Charlie Brown ghost. At every door, she said, “I got a rock.” It was kinda awesome.

I love this next picture so much. Our friends, Terry and Nic came trick or treating with us that night. Terry asked what the kids were going to be and then showed up like this.

{image is a photo of Terry, who is 6’6, standing behind Katie (who is not 6’6). He is dressed in an orange t-shirt which he’s made to look like a jack-o-lantern and is wearing a sign that says, “Welcome Great Pumpkin.” I love our friends.} 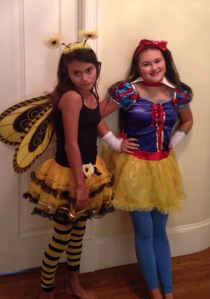 {image is a photo of Brooke as a bumble bee and Katie as Snow White from Brooke’s Halloween party last weekend.}

And there you have it, my friends, 2 kids, 14 Halloweens, a lot of costumes and far more memories.

If Halloween just isn’t your family’s thing, I wish you a relaxing, no-pressure Friday on which you do whatever makes you all happy.

But if it is, as it is in our house, the one day a year that seems to be made for your kids, enjoy it with everything you’ve got.

Because time is flying by.

Ed Note: Another huge thank you to Luau for helping me to find the few of these that I was missing. I know it was EXACTLY how he wanted to spend his time yesterday afternoon. <sarcasm>

8 thoughts on “halloween through the years”