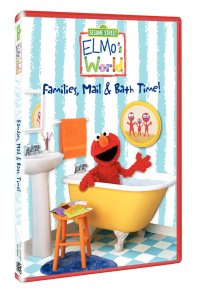 {image is a cover of the DVD, Elmo’s World: Families, Mail & Bath Time!}

One of her favorite DVDs has always been Families, Mail and Bath Time. For years, however, she has made it very, very clear that she would NOT watch the Families segment. Its very mention would send her into a panic, shouting, “NO FAMILIES!”

We had no idea why it was so discomfiting. Until now.

Two days ago, Brooke said, “Remember when I didn’t like the Families part of Elmo?”

I said that I did.

“I was scared of the Families part,” she said.

“Because Elmo’s hair stuck out in it like Noodle hair,” she said.

“Can you tell me what that means, Brooke?” I asked. “I don’t understand.”

“Elmo’s hair stuck out like Mr. Noodles’ brother, Mr. Noodles’ hair,” she said, “And I was scared that my hair would stick out too.” 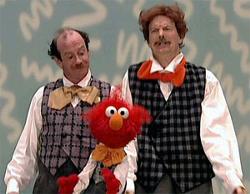 {image is a screenshot of Elmo pretending to be part of the Noodle family in the Elmo’s World Families segment. He is dressed in their signature vest and bow tie and his fur is teased to look like their hair.}

“Do you remember when I was so scared of that?” she asked.

“Yes,” I said. “I’m not glad that you felt scared, but I’m glad that I can understand why now.”

I giggled, as it was a perfectly modified impression of Lucy Van Pelt telling Charlie Brown, “Well now I’ve seen everything!” 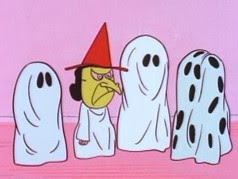 {image is a screenshot of the scene in It’s the Great Pumpkin, Charlie Brown in which Lucy, dressed as a witch, says to Charlie Brown, whose ghost costume is covered in holes, “Now I’ve seen everything!”}

6 thoughts on “now i’ve heard everything”