Editor’s note: Lest you think that Diary is becoming the home of the open letter, this one was written by request. My dear friend, Emma (of the fabulous blog, Lemon Peel), wrote to ask for my help. A fellow Smith Alumna, she remains in contact with the Smith Disability Alliance, who have been grappling with this issue on campus. Have megaphone, will travel. 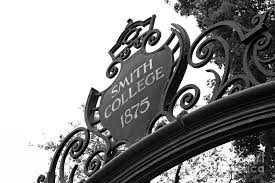 {the medallion above Smith’s storied — and beautiful — Greycourt Gates}

A letter to the students of Smith College, my alma mater,

I have heard that many of you are urging your fellow students and the college at large to participate in the Autism Speaks Light It Up Blue Campaign this April.

I am so grateful that so many of you want to express support for autistic people like my daughter – that you want to raise awareness of what autism is and how it affects the people who experience the world through its lens. As the mother of an autistic child, your support for her means the world to me. That said, I ask you to consider the myriad reasons that the Light It Up Blue campaign not only doesn’t achieve those goals, but actively works against them.

In 2010, I wrote a letter on behalf of Autism Speaks imploring the President to light the White House Blue.  In that letter, I wrote the following:

If our children are to thrive without us, it will only be in a world that understands them. The people that they encounter every day will need to know what autism is – what it really is – day in and day out. They will need to know how hard my baby works to communicate. How much time and support it’s taken to get her where she is now. How proud I am of everything that she has accomplished. How much potential she has. What an incredible human being she already is. How much this entire group of people has to offer our society if we are willing to see them – really, truly see them, recognize them and include them in our communities.

On April 2nd, landmark buildings around the world will participate in a campaign to help shine a light on autism. They will Light Up Blue as a statement of solidarity, celebration, understanding, compassion, and hope. They will light up blue to say, “We are here. We see you. We hear you. We support you.”

I believed, and still believe in that mission. I have, however, come to learn that my intentions in lighting the world blue for my daughter were not just lost, but horrifically contorted by the impact of doing so. All these years later, I am nothing but relieved that I did not succeed in convincing the President to light the White House.

You see, Autism Speaks isn’t working to create a better world for autistic people. Rather, they are working to create a world without autistic people in it. Their goals, as they tell us again and again, are “cure” and, ultimately, prevention of autism. Prevention of people like my child. A cure for who she is. When we light the world blue, we tell her, in no uncertain terms, that she shouldn’t exist. I can’t possibly imagine how hurtful that would be.

Last June, I wrote the following on my blog, A Diary of a Mom. I ask that you not only read it, but click on the links within it. I know I’m asking a lot of you. But what I’m asking is no less than what our school not only teaches us, but demands of us – critical thinking, independent examination, peeling back the layers of what we think we know to find not what has been fed to us as truth, but The Truth. These are the tools for which, some twenty years after my graduation, I am most grateful to have honed at Smith.

This is what I wrote:

As many of you know, after years of trying desperately to change the way in which Autism Speaks approaches autism advocacy, I reached my breaking point last November after Suzanne Wright made it clear with her “Call to Action” that they still have no intention of listening to those whom they purport to represent.

It broke my heart to give up on the possibility that they might finally see the light — the one illuminating the glorious breadth of the human spectrum upon which we all reside. There are good people within the organization whom I was loath to walk away from: the people in the trenches who get it, who work tirelessly and try desperately to change the destructive message. But leadership has time and time again patently refused, and continues to refuse, to stop demonizing autism in the name of “helping” autistic people.

Continuing on their path of shock and awe and disease-model fundraising, they press on dehumanizing their supposed constituents and, in so doing, sacrificing the present and the future for my child and all of her autistic brothers and sisters, all in the name of finding a “cure” for something that many, if not most of them, while they need support and services to live their best lives, have no interest in being “cured” of.

Yesterday, I read a heart wrenching post by Bridget over at It’s Bridget’s World called It’s My Blue. She wrote it back in April, but it was new to me. As I read, I was reminded of something that I’d managed to completely forget in all those years that I was, like a good soldier, buying into the sadly misguided idea that I was helping my child by lighting my house blue and begging my friends and neighbors and even the President to do the same “in honor of my daughter.”

Forget that the entire campaign is, in reality, antithetical to everything that I actually want for her in life – pride in who she is, opportunity, safety, support based on a presumption of her competence and ability.

Forget, if you can, that the real premise of what I believed to be “raising autism awareness” was really raising brand awareness in order to raise money for research into how to create a world without autism, or, to put it another way, to eradicate future generations of people like Brooke.

Forget that the campaign that I wanted to believe was about compassion and acceptance was really about spreading fear and panic at the expense of my child’s well-being.

Forget that the lion’s share (less a pittance to community grants and a conversely healthy sum for overhead) of the money raised went to research, and most of that into a feverish search for causality rather than into the efficacy and long-term effects of commonly used interventions or the establishment of a support infrastructure or advocacy for access to education or employment or healthcare or technology or any single God damned thing that would actually make my child’s life better or easier or safer.

Forgetting all of the reasons that I might have once bought into for lighting the world any color at all, let’s talk about why that color was blue.

“The first question we wanted to ask was – why blue? What does the color blue have to do with the autism spectrum? The answer is that Autism Spectrum Disorders are almost 5 times more common among boys than among girls. So, the color blue represents the boys diagnosed with autism.”

The color blue represents the boys diagnosed with autism.

More and more over the years it became painfully obvious to me that Autism Speaks did not speak for my daughter. But this? Well, somehow, oddly, this hurt even more today than any of this has in a while.

Because it shows that even within their own disastrously flawed paradigm, they don’t even bother to acknowledge that she exists.

I thank you so much for wanting to support people like my girl. And I thank you even more for taking the time to understand why Lighting it up Blue not only doesn’t do that, but is terribly destructive to their well-being.

If you really want to help, start conversations. Invite autistic presenters to campus. Talk about the various ways in which people communicate. Start a book club around Loud Hands, I Might Be You, The Reason I Jump. Advocate for classes on Alternative and Augmentative Communication. Raise money for TASH or the Autistic Self Advocacy Network. Find out how to support autistic students on campus. Talk with – and, more importantly, listen to –  autistic Smithies. Get to know the work of the Social Justice and Equity Committee and the Smith Disability Alliance. Ask how you can support their efforts. Look for programs in your town that support autistic people and their families and ask them how you can help.

But please, please don’t Light it up Blue. No matter how much we might like to believe that our good intentions are illuminated by those lights, they are inextricably tied to a message of hate, fear, demonization, and dismissal of the very people we aim to help.

Thank you so much for listening, for thinking, for not following the path to which you’ve been led, but blazing a new one that really can create a better world for all of us.