On Saturday night, I had the honor and delight of sharing the podium with Michele Gauvin at the Aroostook County Autism Support fundraiser.

A few notes on Aroostook, or, “The County,” as I’ve learned to call it … 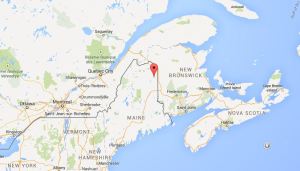 {image is a map view pinpointing Presque Isle, Maine. Click to enlarge if your eyes are as bad as mine.}

You take a very small plane to get there.

This is me and Alysia on the very small plane. 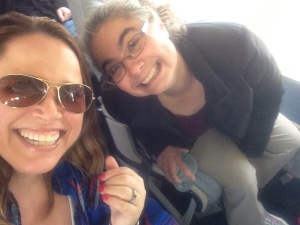 {image is a photo of me and Alysia on the very small plane to Presque Isle. The best part of this picture is that it looks like we’re sitting right next to each other, but we’re actually across the aisle from one another. Not lying about small.}

Don’t be fooled by the smile – she is not happy about being on the very small plane.

And for the record, the fact that I asked her the day before to come with me and she did was like, well, one of the best things ever. I love that lady. A lot.

Anyway, here are some things I learned in The County:

The nearest Target is in Bangor. Bangor is two and a half hours away.

But there’s a Taco Bell and a Subway, so it’s okay.

Potato plants blossom in mid-summer and their flowers are stunningly beautiful. So beautiful that there’s a Potato Blossom Festival. 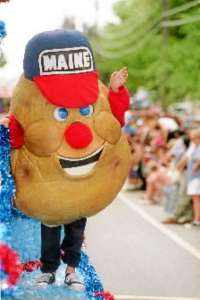 {image is a photo of a guy in a potato costume on a float at the Potato Blossom Festival. I don’t know how I’ve lived this long without knowing about this.}

They also have hot air balloons.

I never knew how much I wanted to go to a hot air balloon festival.

But OhMyGod I need to go to this.

There is a thriving Amish community in The County.

The Amish don’t have to clean up their horse poop, even when their horse poop is in the middle of the road. That’s a little gross, but I guess we don’t exactly clean up the pollution from our cars either. That’s kinda gross too. But you can’t step in it.

There is a big hand from the Simpsons movie in Springfield, Vermont. I realize this has nothing to do with Aroostook County, Maine, autism, or even Amish horse poop, but I learned it while I was there and this post is called, “What I Learned In (Very) Northern Maine,” so I’m telling you anyway. Also, there’s a medium security prison in Springfield. But that’s far less interesting than this, am I right? 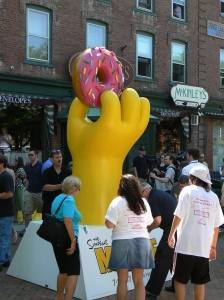 {image is a photo of the big Bart Simpson hand holding a donut in the middle of Springfield, Vermont. Moving on.}

When there are thirty people in the Presque Isle Airport, it’s standing room only.

Autistic people and their families can feel isolated. Especially in a place where the nearest Target is two and a half hours away.

They don’t have to.

No matter where you are, if you have a vision of the community you want for yourself and your children, you can create it.

Sometimes that even happens by accident.

By creating the incredible community they have, Lisa Brewer and Maeghan Swanson are changing lives.

Presque Isle, Maine is a pretty damned awesome place to be. 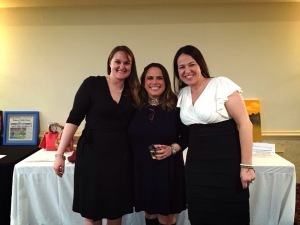 {image is a photo of me with Maeghan (l) and Lisa (r). I’m not sure about their logic of putting the short chick in the middle, but we’ll let that go.}

10 thoughts on “what i learned in (very) northern maine”